SERVICE DOGS FOR THOSE WHO'VE SERVED US®

Dog Tags®: Service Dogs for Those Who’ve Served US® was established by Puppies Behind Bars (PBB) in 2006 to provide service dogs to combat veterans returning home from Iraq (OIF) and Afghanistan (OEF) who have suffered a physical injury, including traumatic brain injury (TBI) or post-traumatic stress disorder (PTSD).

Labrador retriever puppies are raised and trained in prison from the age of 8 weeks until they are ready to be placed with a veteran, which is usually when the dog is between 20 and 28 months of age.  When a puppy is matched with a disabled veteran, final training with the vet and the dog continues specific to the veteran’s needs.

PBB is a rigorous program and is accredited through Assistance Dogs International. We produce well-loved and well-behaved dogs, and we make sure we make the best dog/veteran matches possible. We provide routine, extensive follow-up with each of our graduates and retains ownership of the dog for life to make sure each veteran/service dog pairing is effective. PBB also serves as a resource for all our veterans in the years that follow, providing support, advice, and feedback.

When Army Specialist April Grossman returned from serving in Afghanistan in 2011, it took six years before she finally felt she had made it home. Depression, insomnia, panic attacks, and negative thinking—symptoms of her struggle with combat and military sexual trauma related PTSD—were all taking a toll on her relationships, her job, and her ability to go out into public. Once the number of medications she was prescribed reached a total of twelve, April decided to apply to Puppies Behind Bars for a service dog.

In July of 2017, April took part in PBB’s team training. The classes were held at Downstate Correctional, a men’s maximum-security facility, and April was paired with a beautiful, black Labrador retriever named Waldo. April remembers, “As a survivor of military sexual trauma, the thought of going into a men’s prison frightened me. Unexpectedly, (I realized) these inmates are amazing.” From the inmate puppy-raisers, she learned commands that would help her overcome panic attacks in public.

She was taught never to use the word “no” with Waldo, which helped her rewire her brain to think positively. “Because of their work, I am not only able to live a normal life … but my medication list has gone from 12 to 2. Positive relationships have been built with people around me. Waldo and I have met great friends, we have gone out to restaurants, we shop, and are training for a 5K. We live a happy life!” 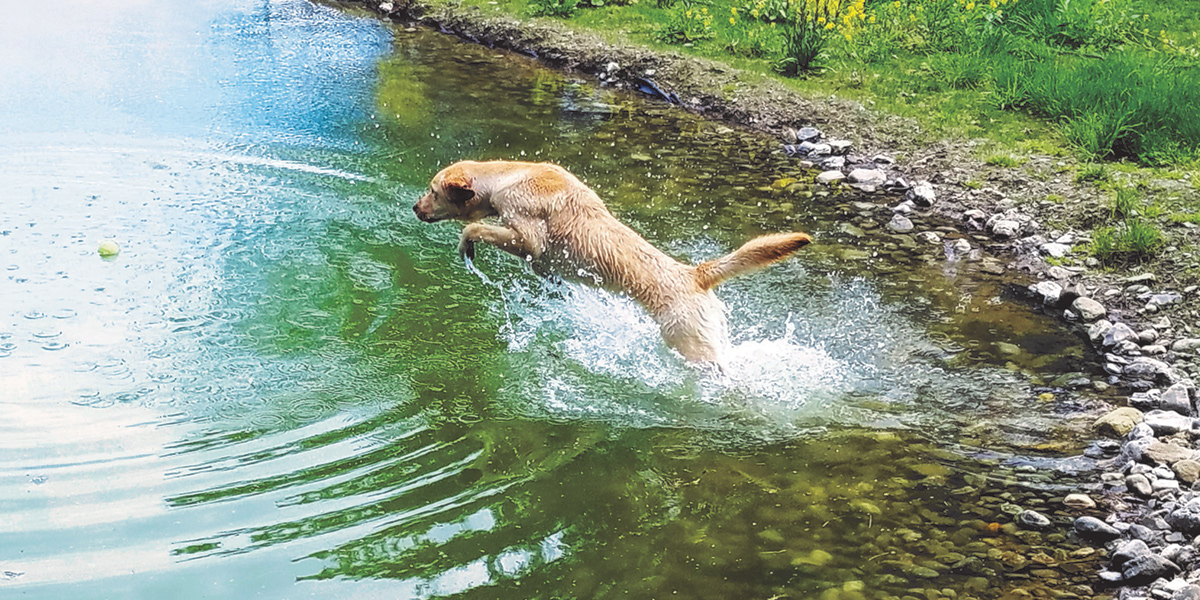 To qualify for a Dog Tags® service dog, you must be capable of incorporating a dog into your life. You must be able to provide a stable, safe environment for our dog, as well as love, exercise and food. Most important, you must be willing to become more independent and to work with a highly trained four-legged companion.

©2022 Puppies Behind Bars. All rights reserved.

Puppies Behind Bars is a non-profit organization under section 501(c)(3) of the Internal Revenue Code, tax I.D. #13-3969389, and donations are tax-exempt to the extent allowed by law.

You may make a one-time donation in any amount you wish, or sign up for recurring gifts on a schedule that works for you.

For gifts in honor or in memory of someone:

If your donation is made in someone’s memory or honor, we will send a card to the designated recipient(s) acknowledging your generous donation on their behalf.

Please include the recipient’s mailing address on the online form. You can view an example of one of our cards here.

Prefer to donate a different way?

PBB offers many ways for you support our mission, including by phone and mail, and with memorial and matching gifts.

Click here to find one that works for you!